From time to time you might be interested in how fast your internet connection is. In real. There are various tools out in the wild. In Germany most of the time Speedtest ist used. Many providers also offer a speed test – which in fact ist just a branded site of Speedtest.

The issue here is the fact, the speed test servers are living behind “the internet” in some other computing centers. They never give you a real idea of your connection speed. They give you an idea of how fast the data transfer to these servers is. If the test is run repeatedly, it also provides different results. Depending on the server on the other side.

Today, I learned about fast.com which is a speed test based on the Netflix servers. It seems that if some company knows how to transport large amounts of data bypassing the restrictions of the internet, Netflix is the one. Said that it seems these Netflix servers are the ones least affected by the rest of the internet. Tests I run on fast.com is mostly appropriate, providing similar download rates I see with Xbox Live downloads while other test sides show large divergences.

Therefore, fast.com ist my recent tip if it comes to testing the speed of your internet connection.

Recently, I have the problem to organize my ideas. To put it upfront: I don’t provide a solution. I simply describe the problem here.

Every time I surf the web, read blogs or news sites and scroll through my twitter feed, I find something interesting. Sometimes colleagues or friends point me to something, sending my a message through on of the many messengers.

Eventually, I want to work through all these articles and sources but often I simply get lost. I forget, don’t find the time and when I have time I don’t remember what or where to look at.

Problem 1: To many Inboxes

Multiple private E-Mail accounts, work e-mail, SMS, multiple messengers, blogs, news sites, work e-mail, Confluence to-do lists, private Microsoft OneNote, work Microsoft OneNote, Teams at work, an Evernote account and so on, this is an endless list of inboxes. Fome quite some time I used Pocket to collect many of these inputs but eventually Pocket turned out just be one additional growing inbox.

For now, I became very pragmatical and forward everything to one single mail account. Links, tweets, articles, photos and so on. Everything I want to read later just piles up on one single account.

Problem 2: Working through the Pile of Shame

For those with kids, they know the problem. Between work, preparing meals, keeping things up and running and spending time with the kids, there is only a little time to get other things done. Especially tasks which take a good amount of thinking, coding or diving deep into technologies. Over time this became a growing list, a queue with no consumer. One problem here is indeed to organize your ideas. I tried Microsoft OneNote, Evernote TheBrain. Eventually, I created just more lists to work through.

At one point I thought about how I organized my ideas and thoughts while writing my doctoral thesis. Eventually, the answer was the act of writing itself. I wrote everything down into a large document which ended up as my thesis. A lot of information was deleted on the way, but at the very end everything was well structured, perfectly organized and compressed to the most relevant information.

While writing another book is still on my list, the solution to my utter problem became obvious. I started to revive my blog. I wrote regularly until 2011 but due to changed focus in my jobs, blog entries became more and more infrequent. I rethought the initial idea of the blog: writing for myself and started to work through my lists and putting down as much as possible to my blog.

How is it going?

Here you are and read one of the things I had on my list. I recently tried to get rid of my “old” lists, one after another is being worked through for interesting stuff, ending in the blog. I am still looking for a nice tool setup which might help me to organize all this information without creating just another inbox, though. Therefore, the problems are not solved yet, but at least they are addressed.

I started to learn a bit about Google Webmaster Tools and how to increase the findability of one’s website. First of all, I was looking for a flexible sitemap generator for WordPress where I ended up with Google XML Sitemaps.

This plugin generates a sitemap file which can be consumed by search engines like Google or Bing. To do so, you have to verify your website with the various providers. Usually, this is done by adding some meta tags to your HTML pages to prove you have full control over the server. Currently, this can be achieved by WordPress’ Jetpack. That way you don’t have to fiddle with the header.php file of your WordPress installation.

You don’t have to, but you can sign into the Google Webmaster Tools to check the verification status of your site.

Also Bing Webmaster Center will provide you a Meta tag you can provide Jetpack to verify your site and to improve the discoverability of your site.

If you master your Terminal it always looks like you are a superhero. Therefore, I always try to present a lot using terminal during my lecture, just to provide some smoke and mirrors.

However, I am far away from mastering Terminal truly. Therefore, it comes in handy that one of my students pointed me to reverse-i-search which is available on Terminal.

this reverse lookup you can search through previous commands used in Terminal before. While this is an awesome feature you can activate by control-r on macOS, it does not allow you to search for similar commands used before. It always shows just exact matches of what you typed.

To search through similar typed commands, you can use fzf, a command-line fuzzy finder available at GitHub.

It’s an interactive Unix filter for command-line that can be used with any list; files, command history, processes, hostnames, bookmarks, git commits, etc.

For me, the bash integration was not available after the installation. After some investigation (I might haven’t read the instruction well enough), I realized the installation script needs to be run:

Eventually, the installation routines put [ -f ~/.fzf.bash ] && source ~/.fzf.bash into .bashrc. I run into this issue before. Reading through this article on Scripting OS X might give you an idea why it does not run.

When you open a terminal application, it does not ask for login. You will just get a command prompt. In other versions of Unix or Linux, this will not run .bash_profile a different .bashrc The underlying idea is that .bash_profile be run only once when you , and .bashrc every new interactive shell.

However, Terminal.app on does not follow this convention. When Terminal.app opens a new window, it will .bash_profile Not, as users familiar with other Unix systems would expect.bashrc

Moving the line mentioned above into .bash_profile and deleting .bashrc eventually solved the issue. After restarting Terminal the key bindings CTRL-R and CTRL-T have been available as expected.

With this little trick the installations of fzf works quite well on macOS X Mojave.

Use reverse-i-search by pressing control-r on macOS to search previous commands typed in Terminal. In addition, you can use fzf, a command-line fuzzy finder to find similar commands and all other kinds of stuff.

I haven’t used feed readers a lot after Google Reader was cancelled on March 13, 2013. Before I made extensive use of it with quite a lot of resources. Personal weblogs, article feeds and so on. Once Google cancelled Reader it seemed many applications and sites stopped supporting RSS and Atom as they did before. I am not saying they did not provide feeds anymore, however, it seemed that feeds haven’t been first class citizen of the Web anymore.

Since my personal focus recently changed towards new and actual technologies (again), I started to read a lot more online articles as I did during the recent six years. So once again, I am looking for an alternative to Google Reader (again).

Feedly never seemed to work for me due to various reasons, including a monthly fee of 5$. But recently I found Inoreader to be very handy. So far, I was not aware of this service.

First of all, it is a Freemium service as well, however, with the free membership it seems you get all basic functionality needed. The very only limitation seems to be a limit of 150 sources. Once reached you can upgrade to 20$ yearly plan to set a new limit of 500 sources. This seems a absolute reasonable price I am willing to pay for this service. 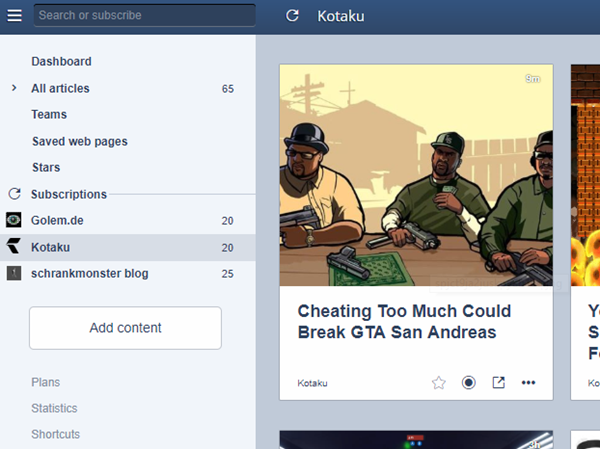 So I will give it a try to keep up to date with my favourite sites, looking forward to hit the mark of 150 sources soon.

In my recent lectures about interactive systems, I talked a lot about standards and guidelines for visual design. When I learned about Can’t Unsee,I had to share this with my students at once. It is a little game where you can learn quite a lot about the details of visual design.

It shows you two alternatives of designs differing only in a few or even one detail. The further your get, the harder the challenge becomes. While the differences are obvious in the beginning the details are getting harder to realize by time.

I can y recommend to play this little game, if yo want  increase your sensibility to the little details of visual design.

While I run meanwhile quite a number of websites, blogs and other services, I was looking for monitoring possibilities – not running on the server I am just monitoring.

I was pointed to Apex Ping, which is a simple and beautiful monitoring of various features of your website.

While it is a bit pricey for my use case at the moment, it is a really nice service one can consider for a monitoring of your sites.

I always loved to enhance my presentations and lecture slides with visual content. At Microsoft, we used to have a Ressource DVD with hundreds of box-shots and icons to be used for marketing and other occasions. Meanwhile, I prepare a lot of educational lecture slides. However, universities usually do not provide such resources. Even most of the companies I’ve worked for did not provide a lot of these materials.

Eventually, I learned about the Noun Project where you can get thousands of high-quality icons for an absolutely fair price.

The project does provide various applications for Mac, iPhone as well as add-ons for Microsoft Word and PowerPoint. I just started to use the PowerPoint add-on being highly pleased by its functionality. You can search for icons, select from various resolutions and choose an appropriate color. Considering the time I spend to create, search for and adapt icons the price of 40 € is quite fair.

If you are looking for a high quality and easy to use collection of icons, you should have a look at the Noun Project.